How Much Room for Rate Cuts? The market expectations for policy rates are often jittery, but the predominant narrative remains intact – rate cuts are coming because inflation is easing and global growth is slowing. Well, today’s combo of lower producer prices and weaker retail sales in the U.S. matched this storyline. However, a possibility of a stronger post-pandemic rebound in China is a force to recon with (both as regards global GDP and inflation). In contrast, the weaker U.S. Dollar could be outright inflationary (via import prices). As of this morning, the market priced in two more small hikes by the U.S. Federal Reserve (Fed). followed by a relatively long pause and a rate cut sometime in the fall. The market expectations for emerging market (EM) rate cuts are often more aggressive – and for a good reason. Disinflation is more established, most EM central banks started to hike earlier than the Fed, and the real policy rates in EM are significantly higher than in all DMs (on a forward-looking basis – see chart below). The last point is one of the reasons why we are optimistic on EM bonds in 2023.

Today’s downside surprise in South Africa (both core and headline) is a good example of EM disinflation gone in right direction. South Africa’s headline inflation eased to 7.2% year-on-year, which brings it closer to the official target, and details of the release suggest that inflation can get back to the target range faster than expected. This, in turn, signals that the central bank might opt for a smaller 25bps rate hike next week and that this hike might be the last in the current cycle. This is not a bad setup for a major constituent of J.P. Morgan’s EM local bond index (South Africa’s weight in GBI-EM is about ~10%) - albeit whether or not the South African central bank would have room for a rate cut (currently priced in for H2-2023) will depend on fiscal performance, as well as political/policy noise (including calls for the central bank’s nationalization).

We expect some residual policy tightening in other parts of EM as well – in EM Asia in particular (the region was a latecomer for the global tightening cycle). Both Indonesia and Malaysia have their rate-setting meetings tomorrow, and both are expected to deliver small (“farewell”?) 25bps rate hikes. With disinflation already underway (and from lower levels than in most EMEA or LATAM) and growth expected to piggyback on China’s reopening, Indonesia is considered an attractive destination for EM bond investors this year. Stay tuned!

Chart at a Glance: EM Real Policy Rates – Time for a Trim? 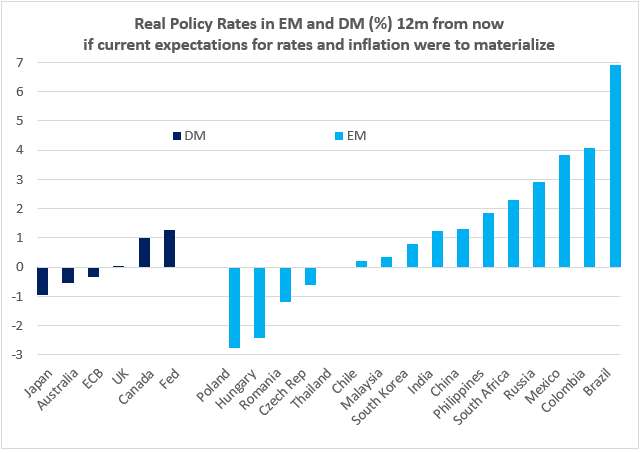 The information presented does not involve the rendering of personalized investment, financial, legal, or tax advice.  This is not an offer to buy or sell, or a solicitation of any offer to buy or sell any of the securities mentioned herein.  Certain statements contained herein may constitute projections, forecasts and other forward looking statements, which do not reflect actual results.  Certain information may be provided by third-party sources and, although believed to be reliable, it has not been independently verified and its accuracy or completeness cannot be guaranteed.  Any opinions, projections, forecasts, and forward-looking statements presented herein are valid as the date of this communication and are subject to change. The information herein represents the opinion of the author(s), but not necessarily those of VanEck.

All investing is subject to risk, including the possible loss of the money you invest.  As with any investment strategy, there is no guarantee that investment objectives will be met and investors may lose money.  Diversification does not ensure a profit or protect against a loss in a declining market.  Past performance is no guarantee of future performance.

The U.S. labor market report rattled the market, but some macro trends in EM are longer-lasting, including “the mother of all base effects”.

EM assets “hi-fived” the data-driven message from the U.S. Federal Reserve. Still, local policies can make a lot of difference – even during the “everything rally”.

EMs keep an eye on changes in the U.S. Federal Reserve’s guidance, but domestic fundamentals – including the pace of disinflation and growth outlook – are just as important.

China’s activity gauges rebounded strongly in January. What are the implications for China’s growth outlook and EM asset prices?